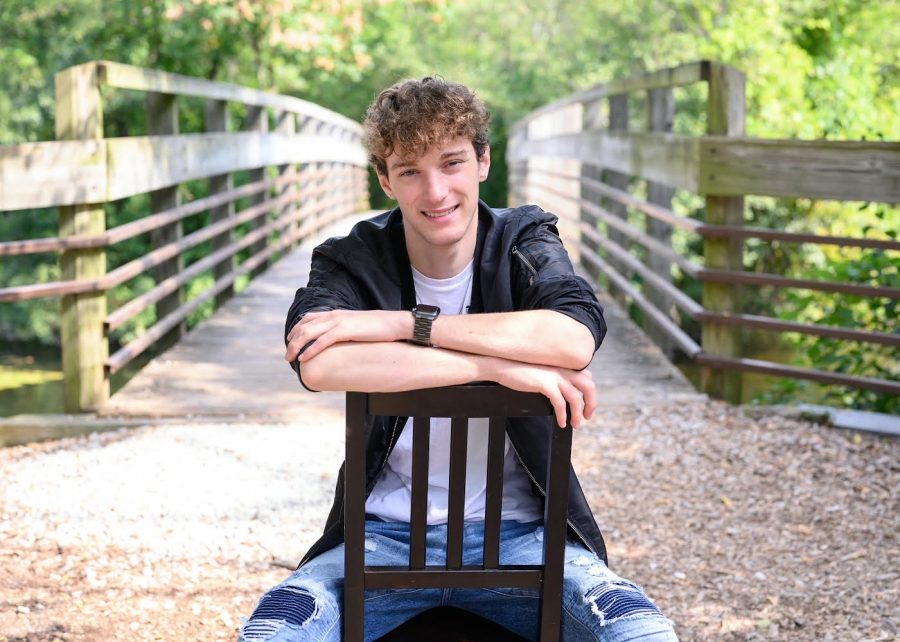 All it took was one shot.

The night before, senior Zach Mayrend was discussing with his team their strategy for Water Wars, a water balloon fight amongst seniors. Zach was discussing just how excited he was to his mom.

No one could have anticipated that by the end of the next day, he would have a bullethole in his left arm.

On the first day of Water Wars, Zach was ready to ambush his first target with water balloons.

Meanwhile, Tamara Mayrend, Zach’s mother, was in the middle of a scout meeting with her daughter and happened to talk to Zach.

“Hey how are you doing?” she asked.

“Hey, I just found out that the last girl went into the grocery store. I’m gonna follow her over there,” Zach replied.

Tamara says she “did not think anything of it.”

Soon, one person became five and Zach’s opponent had arrived at Gallup park. Zach and his friend and Water Wars teammate Matthew Dowling began their search of the park for their opponent. They spotted her car and parked right next to it, and went into the park.

After they failed to find her in the park, they began walking back to Mayrend’s car and suddenly spotted car lights moving in the parking lot.

“We thought maybe she was getting in her car, gotten around us, and started leaving,” Zach said.

But as Zach and Matthew looked back, they saw another car. They walked up to see whether it was another one of their Water Wars teammates. They approached it to see if a Huron sticker was on the car’s front window.

When Zach was 10-12 feet away from the car, the passenger in the vehicle rolled down the window and mumbled something. Zach could not make out what he said.

Then, all of a sudden, gunshots rang out through Gallup Park. He had fired a few rounds toward Zach’s general direction.

Then Zach was shot in his left arm. This all went down at the Gallup Park boat launch. What Zach thought was a safe spot. Where he would hang out with his friends.

“It was like a cap gun went off in my face,” Zach said. “My ears rang and I saw flashes. I didn’t feel the pain of the bullet hole or anything like that. I thought it was more interesting than anything that the adrenaline caused me to not be in much pain. I just felt the warm blood rushing down my arm.”

Zach was applying pressure to his wound and had Matt grab a first-aid kit from his car. Mayrend proceeded to call his mom, who was getting ready for bed.

Tamara was just getting ready for bed and was quite dumbfounded.

“With a gun?” Tamara questions.

“When you get that call, your instinct truly is just go get to your son,” Tamara said.

Tamara rushed out of the house, on the phone with her son.

“What I found amazing is that — I’m not sure why he left the phone on — he was on my speaker phone the entire drive time, until I got to the boat launch,” Tamara said.

“We live a little further away, so I may have driven a little fast,” Tamara said. “I was amazed at how calm and collected he was when he called me.”

The call only lasted 16 minutes.

Tamara was initially supposed to meet Zach at the hospital, but when she looked at the boat launch and the U-shaped driveway, while passing the first entrance, she realized Zach and Matthew were still there. So she pulled in.

She passed by the police officers and fleeted towards the ambulance first.

Ten minutes later, the ambulance left and drove to the University of Michigan hospital entrance. Tamara expeditiously gave her car keys to the valet and ran inside.

“It was really hard for me,” Tamara said.

“He’s legally an adult, so they have to make sure that he wants me, Tamara said. “That meant they added an extra step which was having a social worker talk to him and the staff before they came and got me.”

Tamara was forced to wait outside for an unbearable 30 minutes before she could go inside to see Zach.

“Waiting is the hardest part,” she said.

As she entered Zach’s room, he was frantically asking the nurses and doctors.

“What are you doing?”

“What are the stats?”

Understandably, he wants to know everything that was happening, especially since he is interested in pursuing a field in medicine.

That night in the hospital, Zach said to Tamara, “Mom, you were calmer than I thought you’d be.”

“You don’t know if it is that your kid is in shock,” she said. “I saw the wound, but I didn’t get my eyes on everything. The unknown is always a fear and that’s still a fear. The not knowing. You begin wondering. Is it worse than they are telling us? What did the bullet hit? Did the bullet hit a bone? Is he staying overnight?”

As of May 18, 2022, Zach is still under care of an orthopedic surgeon due to a fracture and nerve damage in his left arm as a result of the bullet.

The Mayrends do not know the full extent of the damage, though mentally Zach is doing well.

“He’s using humor to get through it,” Tamara said. “He did go to prom. He’s going to school, too, so those are all really good signs. He’s looking forward to graduation and all those next steps, too.”

No arrests of the shooter have been made yet. The Washtenaw County Police Department did conduct several interviews, and the investigation is ongoing.

“Wrong place, wrong time completely,” Zach said. “I don’t think the shooter was part of water wars or had any correlation to the game.”

The Mayrends are glad that they are looking at a positive outcome.

“Zack is very optimistic about what he feels and how he’s feeling,” Tamara said.

“We as parents, and we as a community have to be optimistic as well. We need to address it, recognize it, support each other, and move forward.”