Huron Men’s Basketball advances to state semifinals after a 44-34 win vs. River Rogue 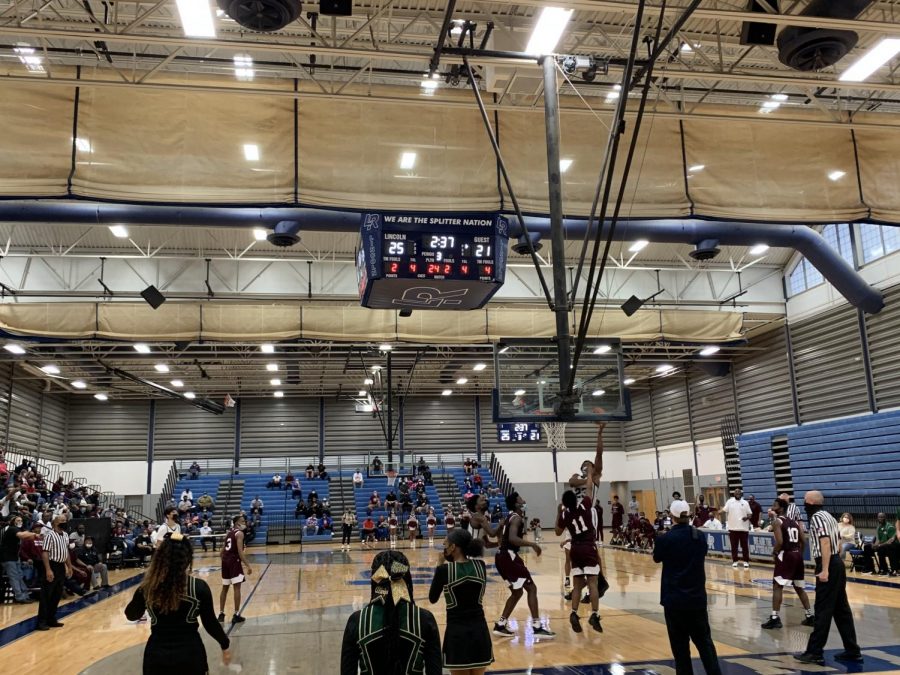 Senior Brandon Rawls goes up for a layup. Huron won 44-34, and will play against Warren De La Salle in the semifinals.

Five days after their regionals win against Livonia Stevenson, the Huron Men’s Basketball Team  advanced once again- beating River Rogue in the quarterfinals with a final score of 44-34.

“The atmosphere was great for a high school game,” head coach Waleed Samaha said. “It was not the large crowds we are used to playing in front during normal seasons but the gym was electric. The team played up to our standards defensively and made enough plays on offense to give us the win [which] allowed us to advance to the Final Four. We are humbled and excited for this opportunity.”

Senior Julian Lewis ended as the game’s leading scorer and also had a double-double, totaling 18 points, 11 rebounds and two steals. One of his most flashy points came when he swept across the baseline- rising for a two-hand dunk in the third quarter to put the team up 29-21.

“It was great to be out there playing with my team and in front of our friends and families,” Lewis said. “And when I got the dunk I just felt a burst of adrenaline and energy because we were playing well and because the crowd was cheering hard.”

Along with him senior Brandon Rawls had a near double-double scoring eight points and bringing down nine rebounds, senior Tyson Edmonson added seven points and senior Devin Womack posted eight points, and team highs of five assists and three steals. To round out the starting lineup, senior Kingsley Perkins set the tone with two early blocks, and eventually finished with three blocks and four rebounds.

In two days, on April 8, the team will play in the semifinal matchup at three p.m. against a 14-3 Warren De La Salle- under the lights in the Michigan State University Breslin Center in East Lansing.