The Rise of the Greek Freak 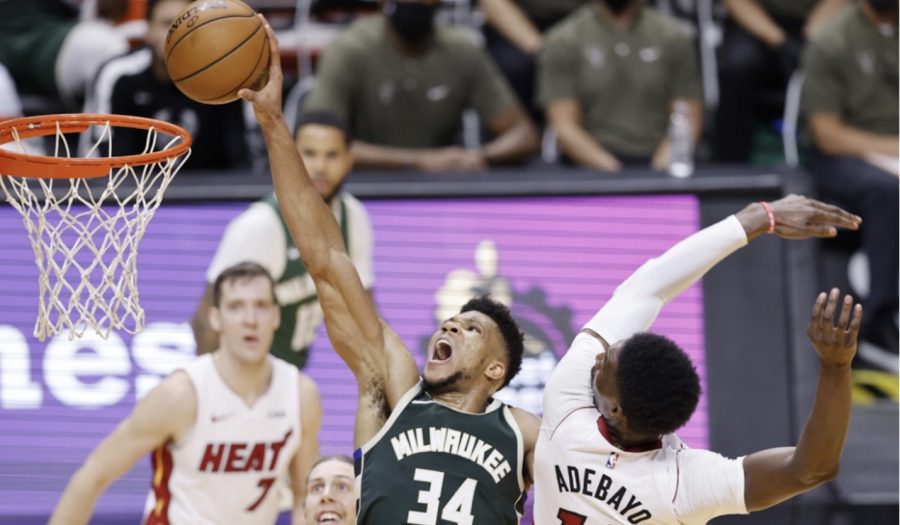 The last time the Milwaukee Bucks won an NBA championship was nearly 50 years ago, in 1971. The last time the Bucks even won a conference title was 1974. Since then, the Bucks have seen many stars come and fade, ever since their dominance in the early ’70s with Oscar Robertson and Kareem Abdul-Jabbar. For nearly 50 years, this team was shrouded by obscurity, failure and fading glimpses of what the Bucks used to be.

Players like Sidney Moncrief, Marques Johnson, Ray Allen and Michael Redd all shined for the Bucks. But, the Bucks still never performed well enough, even with all of these stars playing prodigious basketball in their respective eras, to really make an impact on the NBA’s landscape as a whole, until one player changed everything.

Giannis Antetokounmpo was born in Greece in 1994. After being poor and homeless for a good portion of his life, he picked up basketball. Combined with his sheer size at 6’11 (rumored to be more than 7 foot now), and with his 240lbs of pure athleticism and strength, Giannis dominated the youth Euro circuit, before catching the NBA’s attention. Giannis was then drafted at the 15th overall pick in 2013. The pick was very scrutinized at first. Many drew on Giannis’ lacking offensive skills. But, they would be wrong.

I don’t think anyone knew back in 2013 when Bucks GM John Hammond made the choice to draft a rather unknown SF/PF named Giannis Antetokounmpo, that the Bucks drafted one of the most dominant, defensive powerhouses in the past 20 years.

Until the 2016-2017 season, everyone practically forgot about Giannis. The Bucks were a measly 33-49 the season prior, with a very unproductive young team. But then, something happened: the Bucks weren’t losing as much. Players like Khris Middleton started to put up great numbers. But, nothing compared to Giannis. After averaging 16 points, 7 rebounds and 4 assists in 2015, he was suddenly averaging 23 points, 8 rebounds and 5 assists. At the end of the season, he was awarded Most Improved Player.

That season, the Bucks finished with a winning record for the first time since the 2009-2010 season and made the playoffs. The young Bucks squad ended up losing in the first round, but this was a glimpse of hope for the future of the Bucks.

The season after that, Giannis’ stats continued to go up. Becoming only the third player ever to average 25/10/5/1/1 in that 2017-18 season, Giannis led the Bucks to another playoff berth, only for it to end in heartbreaking fashion in the first round again. Giannis was on a mission to put the NBA on notice, and this wasn’t stopping the now-nicknamed “Greek Freak”.

In the 2018-2019 campaign, the Bucks hired coach Mike Budenholzer, after releasing former coach Jason Kidd last season. The new Budenholzer/Giannis era started with a great first season: the Bucks totaled a 60-22 record, the best record the Bucks had since the 1980-81 season. The Bucks had the best record in the entire NBA. They finally showed serious promise for a Finals run, until it all fell apart in the Eastern Conference Finals versus the Kawhi Leonard-led Toronto Raptors. In a heartbreaking Game 7 loss, the Bucks just couldn’t get the job done.

One upside to this season was Giannis won league MVP, marking him the first player ever to win both the MIP and the MVP. Giannis also averaged 28 and 13, his best averages in both categories at this point.

Finally, last season was a different Giannis. Giannis averaged 30 points, 14 rebounds and 6 assists, while also putting up 55 percent field goal percentage. Winning both the MVP again and the Defensive Player of the Year, the Bucks couldn’t rally behind Giannis like they did the season before. Although going 56-27 and making the playoffs, they got beat by the eventual Eastern Conference champion Miami Heat.

This season, although just barely into it so far, Giannis has still been the most dominant force. Averaging 27 and 10 currently, Giannis is still a favorite to win his third MVP title this season.

Giannis Antetokounmpo can be described with many words, but I don’t think many would argue with him being simply described as a phenomenon. Already being posed as the future poster child for the NBA once LeBron retires, Giannis serves as a beacon of light for many of how good things can come out of rough beginnings. After being overlooked his whole life, Giannis has now finally caught the well-deserved attention he wants on him, and it’s only up from here.