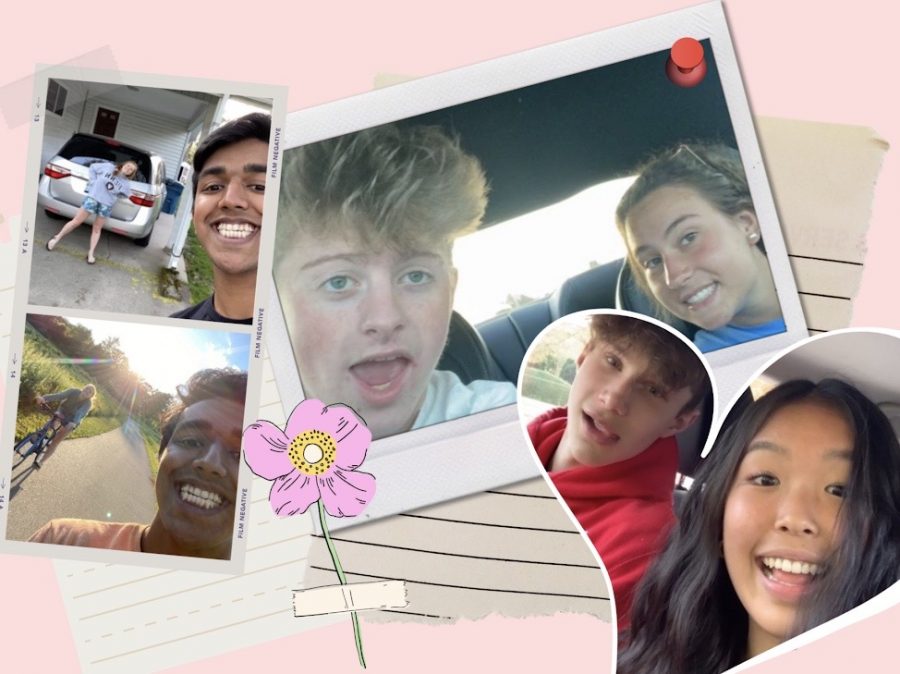 "At this age, making new connections is a big part of life so many teens have found ways around the pandemic to continue them." -Hemati, Wu, Al-Saady

Love is in the air, but so is COVID-19. Dating is a large part of many high schoolers’ lives, but in the middle of a pandemic, how has it changed?

“Before March, it was easier to go out with someone and have a good time, but now it’s a lot of them just stopping talking to you, getting ghosted, and not having an explanation why,” senior Harry Youngman said. “It’s sad and irritating because they stop talking to you and you don’t really have a way to discuss it in person.”

The lack of in-person connection and communication creates feelings of separation that other people have experienced as well.

“I’ve definitely a tendency to pull away and isolate myself which I think a lot of people do and a lot of people are experiencing,”senior Sophie Hammond said. “I’ve been trying to work harder to reach out to people instead of expecting a reach out from them. Little things like everyday texts just like ‘how you are doing’ can go a long way so that they know that you’re thinking about them.”

Hammond has been dating her boyfriend for a little over a year. While navigating COVID-19 restrictions has been challenging, Hammond also found it helped their relationship.

“COVID has strengthened our relationship because when you can’t see each other because of quarantine or wanting to be safe, you have to rely on being friends first and just being there for each other and keeping each other company in an unconventional way,” Hammond said.

Hammond and her boyfriend began watching movies together while still separated through an app called Netflix Party as well as completing coloring pages and talking over FaceTime. Additionally, they played Bananagrams and changed the rules to accommodate for playing separately. Hammond suggested going on walks, picnics and drawing with chalk for socially distanced date ideas. However, finding new ways to go on dates with new people has been hard for others.

“We definitely can’t go around to actual places because everything’s really limited and we have to wear masks so it’s annoying and it’s really cold outside now, so we can’t do much, but we go to places like Panera to get food and then figure out where to go,” Ma said. “We also went to a bonfire together, but we socially distanced ourselves because there were other people there.”

To stay safe, Ma and her boyfriend have reduced their “circles” to 3-4 people, but Ma acknowledges that she should cut her circle more because of the rising cases.

Hammond and her boyfriend also set protocols for socially distancing.

“I didn’t see him during the first real shutdown in March except like once or twice a month and it would be socially distanced.” Hammond said. “We started seeing each other again around May I think and since then I’ve seen him consistently because I consider him part of my close circle.”

Similarly, senior Olivia Conatser didn’t see her boyfriend between March and June, then was allowed to see him again over the summer.

“It was a little difficult at first because we weren’t able to see each other for a couple months but we talked on the phone all the time during quarantine,”Conatser said. “We would also meet up at school sometimes and talk to each other from inside our cars with masks.”

But for those who are trying to meet new people, it has been even more difficult. Senior Elayna Parkin would try to meet up with guys in a parking lot six feet apart or at Barton Nature Center.

“It was hard though because you don’t know much about a person you’re about to meet for the first time and since my family was cautious with COVID I didn’t want to take too many risks with new people,” Parkin said.

This was a new challenge for everyone. However with social distancing and great weather this summer, students made it work. Some relied on social media to keep contact with their friends while also trying to start a summer romance.

A lot of teens have turned to social media to meet new people. But what now? An internet based connection only goes so far, and there is the possibility of being catfished.

Youngman was able to meet up with someone he met on the Internet.  He was able to make meeting people over the internet work by meeting up in person. The two followed COVID restrictions as well as discussing what they’re comfortable with in terms of social distancing before they met up.

At this age, making new connections is a big part of life so many teens have found ways around the pandemic to continue them.

“COVID or not, it’s ok to experience waves in your relationships and emotions,” Hammond said. “It’s ok to have seasons of doubt or not exactly sure where you’re going or what you’re doing in that relationship. It’s normal, COVID just brings that out for a lot of people.”