The girl behind the mask reveals her story 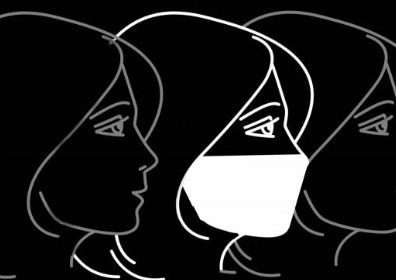 If sophomore Ashley Wang doesn’t wear a mask, she could be hospitalized. For her, a common cold could be fatal. Ashley has primary ciliary dyskinesia, a genetic disease that prevents bacteria along her respiratory tract and other tissue and organ linings from being cleaned out and swept away.
In other words, Ashley wears a mask so she doesn’t get extremely sick. She doesn’t have the flu, COVID-19 or any other virus. She’s not infectious at all.

Ashley came from Japan seven months ago. She lives with a host family because she wants to be fluent in English. She doesn’t regret moving to the United States, even though she has faced hurtful comments and actions.
Teachers and students avoid her. Groups of students will scatter when she walks by. She’s been spit on, in the hallways.
All because she wears a mask.

When she first landed in the U.S. Ashley immediately contracted pneumonia, and even though it was treated, the pneumonia came back. This is when she first realized that there was something wrong with her lungs.
“The doctor told me that if a virus comes into my lungs, I might get an infection or get sick,” Ashley said.“The virus could be fatal, so the doctor told me to wear a mask.”*

While Ashley had worn the mask when she was in Japan, she first started wearing the mask at Huron in the middle of the first semester. She noticed the strange looks she got from people and how students in the hallway would specifically avoid her.

“There’s no mask-wearing culture here, it’s very different,” Ashley said. “[Outside of school] everybody watches me and thinks ‘oh she’s wearing a mask,’”*

Ashley’s host family works to protect Ashley as much as possible. She takes medications everyday and frequently has doctor visits. She finds it stressful to take as many precautions as she can to make sure that she doesn’t get sick, but she has been supported by the friends she has made in her classes.

“My friends have helped me with my transition into America by listening to what has happened to me,” Ashley said. “Just having someone who is willing to listen to me supported me the most through this transition.”*

Ashley only takes off her mask at school in room 2205A, her English plus class. Hala Boles, her teacher, creates a positive environment for her students and has no tolerance for bullying.

“I have a rule in my room to respect yourself, your classmates, your teacher and anybody that comes in the room at all times,” Boles said. “The nurse asked that we read the statement [about Ashley’s condition] and I asked Ashley if she wanted me to read it in class, and she said yes.”

Boles is a calming presence in Ashley’s life. When Ashley first started wearing the mask to school, Ashley faced criticism from a student in Boles’ class. Boles immediately tried to make sure that Ashley wasn’t ostracized by her classmates.

“There was an issue where somebody told her,‘if you don’t want to come to this class you can take online classes’ and I addressed that in a bigger perspective,” Boles said to uphold a respectful environment in her class. Even though Ashley has faced crude comments and staring, she isn’t afraid to start a conversation with someone she doesn’t know. She accepts if they don’t answer.

“I take the initiative to talk to somebody,” Ashley said. “In all of my classes, the teacher has already told my classmates about the reason why I wear a mask – but in the hallways, people don’t know.”*